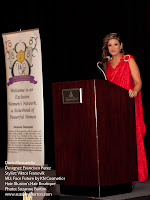 Franovik's Green Couture for the Women of the Roundtable 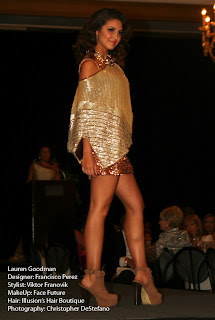 The evening started at 1:30pm for us, It was raining so we had to park in front to take everything down; understand the designers need to get there earlier because we have clothes to take down, pull out of bags and set up for the models once they arrive.

So we got to the Signature Grand, and Miss Terri welcomed us with a great BIG Smile, as she normally does to everyone visiting The Grand.

We were told where to go and as we are heading there, Miss Polly Wilkie-President of the Prestige Club, walks in with three of our models, hugs and kisses are usually the welcome between models and designers.


As we start to move, I see another model, key model actually, It's Aubrey and her mother Diane; I drop my stuff and run over to them, almost running into the glass door.... can you imagine, "Blooper" running into the door.
I love these women and they also drove down from Naples so extra attention is taken to my peeps!!! As we walk in, we are instructed that we have the suite with three (3) rooms and a bigger smile is put on my face. 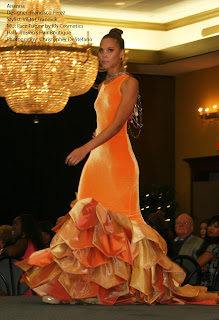 We get to the suite and I start assigning areas; one was for hair, another for makeup and the other for changing, and we still have the welcoming area.
I walk out and see Linda, our service manager. Linda wants to make sure everything is okay , I needed stools which we got super fast and then agreed to what time food was going to be served.


Food was amazing, we had all kinds of wraps, fruits, cheeses and drinks. So the girls, parents, hair designers, make up designers and Francisco pigged out. I on the other hand, could not partake cause I was running around, but I managed to taste three(3) grapes.
The photographers started arriving, Beatriz Stilwell was the first. She is one of the photographers I use at photo shoots. She invited a few others in her photography group.

Second to arrive was the official event Photographer, Suzanne Barton, she photographed everything and everyone; what a classy lady. The other photographers came in, among them Phoenix and Michael Wright, a few others which I did not catch their names.  Then Univision, NBC and Tropix TV. 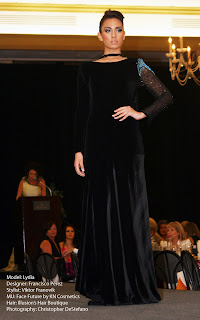 We were interviewed the fabulous Andrea Chediak from Univision in Spanish and Nick from Tropix in English.
NO events goes without a hitch, and there were a few;  lighting was one, sound was another and visual was the other. It all got taken care of, so no further complaints.


I will tell you the runway was spectacular, it was exactly what I wanted.  I was going in and out of the ballroom, my sponsors coming in. The first to show her pretty face was Kathy Nunez, CEO & Make Up Artist of Face Future-KN Cosmetics came in first to set up.
Kathy had to work fast because she was in charge of three other MUA's and we were using her products, so it was up to her Mom (Diana) and Son (Sean) to take care of the sponsor table. They look very cute behind the table...Then it was Yenny Machado, Owner and President of Yenny Fashions jewelry.

Yenny had so much stuff she could have filled 3 additional tables, WOW, great stuff. Following Yenny was Latoya Edwards, President and distributor of OrganoGold coffee. The coffee was wonderful;  you know South Floridians and coffee-it's a love affair that expands decades, if not centuries, so she was a big hit. 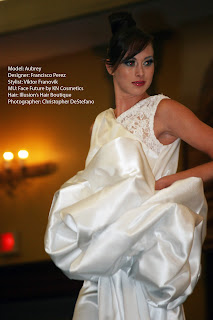 Following Latoya came Celinda, owner of Linda's Fashion Shoes. Linda Fashion Shoes provided shoes for all the girls, they brought 120 pairs of shoes-all linked to the colors of our dresses. They had the end table and as I understand, they all had some sales, nothing to brag about but something, something.
As the night progressed, we were interviewed by Univision, NBC, Sun Sentinel, Tropix TV, Lifestyles Publications, Ciudad Weston Newspaper, Natural Awakenings, Latin Connection, among others.


We are pulled away again to the ballroom, where I meet up with Miss Kandee G, MC of the event to go over the fashion show, garment description and how we were going to start the program. 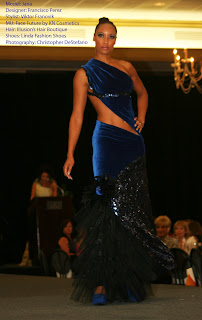 I opened the show and introduced Kandee G, after she taking the walk down the runway, since we made her dress as well. So the fashion show begins, 20 girls strutting their stuff to DIVA. It's an upbeat song that talks about DIVAS, just the right song for my models, ALL DIVAS (Jana, Aubrey, Lauren, Karen, Lydia, Nina, Paige, Kiara, Christine, Andrea, Gaby, Fernanda, Giselle, Karen P, Karina, Marina, Meily, Taylor, Arianna, and Cindy) not in that order.  Lauren opened the show and Jana closed the show.


So the show was over, it took 16 minutes start to finish. I ended the show with remarks and thank you's; I'm sure I forgot so many people. I tried to remember as much as I could but I was really tired. I asked Kathy, Ola, and Shay to come up to be acknowledged and made them walk the runway too.
I went back to suite, to put all the dresses in bags and try to see all my models before they left. Most of them were gone, the few that stayed had parents and they picked up as well. 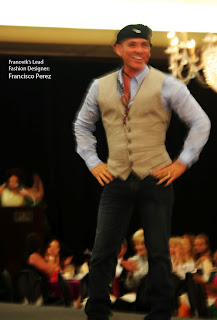 We were quite hungry and went to eat something and drove Yenny, jewelry designer home to Miami Beach. The day turned into 12 hours, we got to the Signature Grand at 1:30pm and got home the following day at 1:30am.
I'm very happy everything turned out ok, now it's waiting for pictures from the photographers.  I can't wait, trust I'm dying here, you see I'm spoiled;  I work with many photographers but there are two (2) photographers (Don Seidman and Simon Soong) that give me pictures disc's as we leave the event.


Anyway, I will only have to wait a few more hours, Suzanne Barton is preparing a picture disc which I will pick up tomorrow. Christopher, my production Director did happen to take a few pictures and they are the ones you are seeing here.....
You see someone is always looking out...Thank you to everyone that took part in some shape or form. I wanted to mention a few others: NUVO Sparkling Vodka, Ethereal Management, Hip Chick, Keel Magazine, Ginette Bover, Latin Connection Magazine, Beatriz Stilwell, Carmen Goodman, among others. 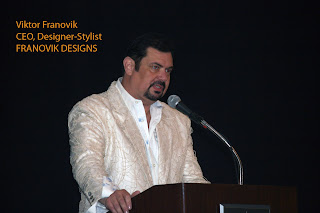 A special thanks to Polly WIlkie of the Prestige Club and the Doris Muscarella, President, Public Relations and Marketing Specialist of the Women of the Roundtable.

Posted by Viktor Franovik at 8:00 PM No comments: