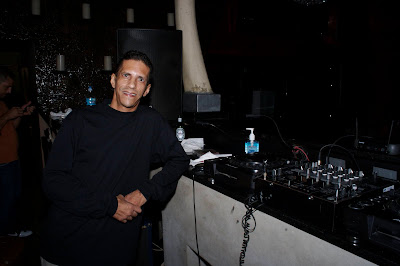 Jose, as we know him as Raymond (middle name), or DeeRay-known in the music circuit is our exclusive sound specialist-DJ. He has produced all of the fashion show mixes and all the editorial lounge music we use.

Born in NYC, he's been around the block with some heavy hitters, among them local DJ David Padilla, Ralphi Rosario, David Morales, Larry Levan, among other NY DJ's.

He's played in some local clubs, both in Fort Lauderdale and in Miami, let alone a few in New York. A member of the Fort Lauderdale/Miami record pool and WINTER MUSIC; D-Ray kinds keeps to himself until we call him for a new mix of existing tunes for our shows.

He is particular about his music, being from both eras, (Disco & House) he always looks for the dub versions, house beats and different sounds. we really beat each other up when we sit to discuss what i am looking for the next show. I want to hear sounds that no one would think of, i want to hear sounds and deep beats to get the girls and my audience going.

It's not easy working with me but the end result is hot, sexy and beatfully sound. 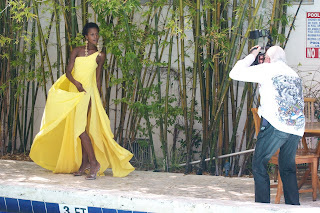 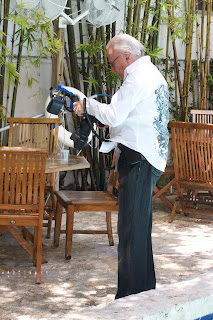 Don Seidman is one of the official photographers of Franovik Designs. We met last year at Funkshion fashion show in 2009. From there to now, Don and I have been working together on such events as the Miss Earth United States, Miss Teen Earth United States, Ms Latina International plus all the fashion events including Green Fashion and Elements of Green.

Don Seidman is a South Florida based professional photographer who specializes in beauty pageants. He is the official non-press photographer for the Miss Universe, Miss USA, and Miss Teen USA events. Don has over 40 years of experience in the photography industry and has traveled the world photographing some of the most prestigious events. Don also photographs local and national events including the Winter Fest Boat Parade and the Albuquerque Balloon Festival as well as the other categories listed above.

He is a gentleman and a pleasure to work with. He has an eye for the beautiful and we are honored to be able to work with Don. Visit his website, www.donseidmanphotographers.com. YOU'RE THE BEST MY FRIEND!


Photos by: Christoper DeStefano
Model: Skylar
Posted by Viktor Franovik at 9:06 AM No comments: 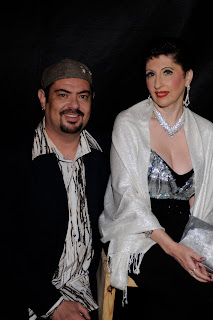 Angela is also an accomplished Singer and has appeared on various variety shows, cruise lines and off-broad-
way productions. In the Summer of 1999, Angela toured with Jonathan's Big Band and performed excerpts of "Phantom of the Opera". Angela has also competed and directed many Pageants. She had held the Titles of Mrs. New Jersey Globe 1996 and Ms. Morganville NJ United States of America 1997.

Angela and her husband Al Posillico work diligently promoting the organization and their delegates. I see and know of wonderful things happening in the near future. to see more on the organization, visit their website, www.mslatinainternational.com.

Viktor
Photo by: Beatriz Stilwell
Posted by Viktor Franovik at 8:17 AM No comments: 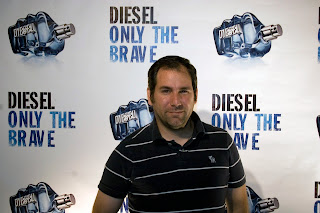 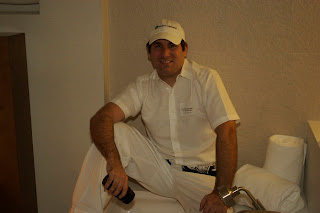 Christopher is my personal rock and the one that takes all the abuse and yet sticks around. This intro could possibly be the longest and the most sincere of all these introductions. I know Chris since the tender age of 18, kind of the "Loco" kid, but a kid prodigy.

Where do I start, He has so many things I Love and admire. He is a bond and SciFi fanatic, his artworks are amazing, detailed, computer skills are the coolest. He went to school for film production and has made several movies which I have been a part of. The Coffee Shop Robbery and It's About Time; both received the Gold Aurora Award, which is the Oscar for student productions. I was honored as well for being his Production Manager, the awards are on my mantle and wall.

He founded his own production company, called DeStefano Studios, the logo is the GAYEST thing you've ever seen. It's a beautiful nude man with angel wings; it truly is artistic but I think it will rub people the wrong way. We as a Country and as a people have to grow; people just don't understand nor care to understand differences.

Lately, Christopher has become my media specialist and fashion sidekick. He photographs, videos, assists with all the stuff that I have to take with me. He is also involved with Models&Designers magazine. He recently interviewed Ex-GOGO Belinda Carlisle and her son Mason, that will be featured in the first issue, due out next year.

On his agenda he has a few other celebs, I, myself want to see Miss Julie Newmar (hint, hint) grace the pages of my magazine. I have a few celeb surprise interviews up my sleeve as well.

Anyway, getting back to the kid, I am most proud of him, It has been an honor and privilege to work by his side on his productions and with mine. I continue to learn from this kid, that drives me crazy but could not live without. If any production company or representative is reading this, hire this man, he would be an asset to any company.

Thank you Christopher for filling my life with joy, headaches, and laughs. We do laugh alot, I get mad too but at the end of the day, I can't be mad for long. Come to think of it, Raymond does the same thing, well that's another Introduction.

Slowly but surely, you will all get to meet all the people behind my scenes, Franovik, Models&Designers magazine and now the cosmetics line, another chapter, (www.franovik.motivescosmetics.com)soon to be opened. Til then,

Look for more introductions of my beautiful models and the professionals I work with.

Viktor
Posted by Viktor Franovik at 4:42 PM No comments: 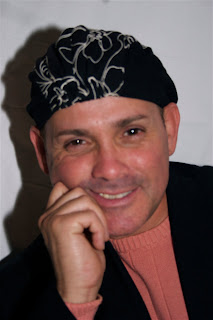 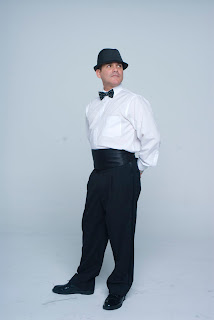 Francisco Perez, born in Caracas, Venezuela, is the one that confections every garment at Franovik Designs; although having two seamstresses assisting us, he oversees all the garments. Francisco, most of us call him "Frank" has been designing for over 20 years now. Frank has a full time job; when he's not working or creating new pieces, you'll find him on the beach; he's quite the dancer and takes care of his mom back home.

Francisco has created several collections, all to be seen in Franovik's magazine, "Models&Designers" due out early next year (www.modelsanddesigners.com).

Look for the magazine early next year at all our events, and website. For those who would like to sponsor an ad in the magazine, reach me at viktor@modelsanddesigners.com.

Soon to be uploaded, the Franovik home opening page.
Posted by Viktor Franovik at 10:40 AM No comments: 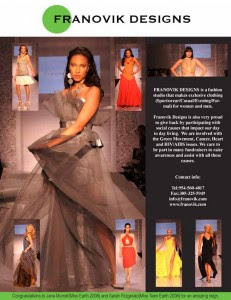 I AM VERY HAPPY TO INTRODUCE THE PARTNERING OF FRANOVIK AND MOTIVES COSMETICS. PLEASE VISIT WWW.FRANOVIK.MOTIVESCOSMETICS.COM FOR VIEWING AND PURCHASING THIS INCREDIBLE MAKE UP LINE. WE WILL START PUTTING PRESENTATIONS TOGETHER VERY SOON IN YOU LOCAL AREA. TO PURCHASE OTHER EVERYDAY PRODUCT PLEASE VISIT, WWW.FRANOVIKDESIGNS.UNFRANCHISE.COM

VIKTOR
Posted by Viktor Franovik at 9:20 AM No comments: