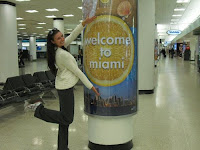 three days of intense work. She was greeted at the airport and then taken to her hotel room.

She checked in went to her room to refresh before we went to fittings.

Frank and I had worked all day so we were tired and hungry, so was Danielle. So we went to a local restaurant, where we had surf & turf, discussed the agenda and answered questions.

From the restaurant we took a brief tour of the tourist traps and went home to fit the national costume. 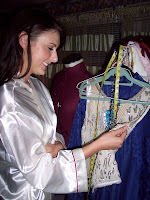 Danielle fit perfectly, minor adjustment but it fit like a glove. While Frank added more medallions to the outfit, I began to pull dresses for Danielle to put on. These were the items for the photo shoot on Sunday.

The evening ended on a high and we were all exhausted, it truly was a long day.

I had to work that Saturday morning at an International Cardiology conference (MIRS) at Doral. Meanwhile, Danielle and Frank where at the beach checking out and buying bathing suits for the trip. I heard they had breakfast on the beach, overlooking the beautiful Hollywood coast.

One of the things Evan wanted Danielle to do was to hook up with Jana. So I started texting Jana and left a message. Jana called back and I found out that she had moved to the West Coast but we lucked out; Jana was in South Florida for the day.

lunch while I was on my way to the house from the conference. I was also talking to Esther Dollar, who was waiting for us as well. Danielle and Esther are friends and wanted to spend sometime together.

We went down to Miami to pick up Esther. Esther is a current titleholder at another pageant system. We did a little sightseeing then proceeded to go to Lincoln Road for dinner.

The evening was gorgeous, breezy, in the 70”s, the evening sky was clear and Lincoln Road was "kickin" with people. 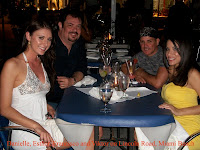 Dinner was great, conversations were lively and educational. After dinner, we went around and did some more shopping. Stores stay open till around 2:00 in the morning on Lincoln Road. It was a long day for everyone, jumped in the car and went home. 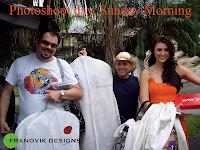 We got up late, I was started to get ready putting outfits, shoes, make up, and props in the car. We picked up Danielle and Esther and headed over to the shoot where Don Seidman was waiting for us.

We were there 4 hours; we shot the garments and lastly the costume. The costume is big and beautiful and Danielle looked stunning. I can’t and won’t ruin the surprise by placing a picture before the actual Vietnam pageant but it’s a force to be recon with.

Don was a professional and a visionary; we also shot a couple of pictures with spirit products so we can

pitch them to their companies.

After the shoot we went and had lunch, took Esther home in Miami and then home for a little while and then took Danielle to her hotel room. She was leaving the following morning.

I got home and kept working on the pictures until 1:00 in the morning, went to bed, had to work the following.

Thanks Danielle, you make us proud and you do our costume so much justice….now bring home the CROWN!!!!!

A working weekend with Danielle

Posted by Viktor Franovik at 9:30 AM No comments:

OUR DRESS ON THE BLUE CARPET AT MIAMI STYLE AWARDS 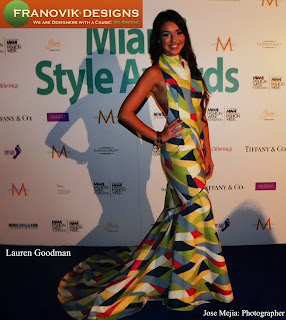 MIAMI STYLE AWARDS.....Lauren Goodman, Miss Earth Florida Gulf Coast at the Miami Style Awards last Wednesday at the W hotel, Miami Beach.
The Style awards, a part of Miami International Fashion Week, a product of Beth Sobol was an event to be at.
As per Lauren the evening was exciting and was a wonderful experience. I was greeted by Ms Sobol and then photographed and interviewed. Throughout the evening, myself, Andrea and Kelly met and mingled with all the guests as we walked throughout the event. The event was held outside, the Miami night was wonderful, a little windy but that's Miami for you.
Everyone was entertained by Cuban singer Albita, she was awesome. All in All the evening was fun, it was nice to be amongst the beautiful people of Miami. 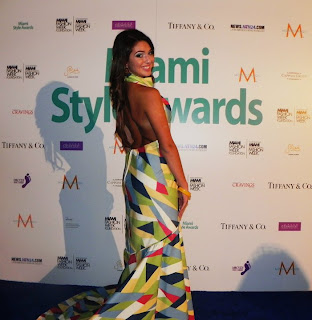 Lauren is wearing an original Franovik Designs made of recycled curtain blackout material. This garment was made specially for the ELEMENTS OF GREEN collection, seen at Design Miami week in March of this year.
You can see the whole collection at www.franovik.com, go to collections; also check out our magazine, www.modelsanddesigners.com.
Thank you Lauren....
Viktor Franovik
Posted by Viktor Franovik at 9:32 AM No comments: