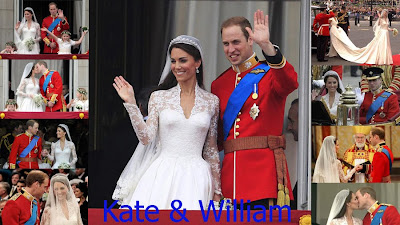 Like everyone else, at least fans of the Royals, I was up at 4:00am to see the pageantry of the wedding and everything that goes with it. Also I wanted to gasp for air on the fashions and criticize the “what was she thinking” Celebs, royals and guests.

Now onto the bride: Kate Middleton, Duchess of Cambridge. She was stunning, simple but elegant. She was being compared to Grace Kelly and the late Diana. No comparison between her and

I absolutely love the dress, especially when I saw the train and the dress skirt were one; Sarah Burton created a stunning design! They spoke about the detailing but you really could not see it but I trust we will soon.

I was also checking out the ladies in the beautiful church, dress attire nothing to brag about unless you were Victoria Beckham, which I will get too. The hats were stunning, OMG, Victoria’s was chic, cute, loved the color and the hair was working.

I loved them; there was one in particular that was “FREAKIN” Amazing, it was a side hat, shinny charcoal which also had a bow on her hair. My God, I wanted that hat, for my collection ofcourse (not for me, I have a big head, no sense of making it bigger). Anyway and the Bird wearing it was lovely as well.

There were a few I hated, the first that comes to mind in Camilla’s…(What were you thinking). You’re Camilla!!!! You should have had one of the CHICest, most Stunning, most Savage, most OOTW-“Out Of This World” hat. This should had been the hat of all hats, yet you went with that pasty beige color atrocity which had a bow or a flower, I had to pull away and not look any further, two thumbs down.

Also, The Queen, Lemon? Wow, although the color is very in now because of spring but the hat, What Happened? I assume that hat was the most expensive of all the hats there but so simple? I, me, myself would have had the most Kickass Alexis Carrington, throw down, in your face Badass hat. Mine would have told every other hat to go home, even the fabulous Victoria and Black Charcoal hat with bow; that I just adore.

I won’t go on but Prince William and Harry’s cousins (Eugenie and Beatrice) did not fend well either, maybe the cute little blue feathered one but not the other hat which looked like abnormal curved antlers. OMG WWST (what was she thinking).

It was a wonderful wedding; Unfortunately, I had to get to work but not before seeing them on the balcony and seeing them kiss, as I did before with Charles and Diana.

The wedding has set the tone of my day, nothing better to see a lovely wedding and or celebration in the morning before going to work.

I have attached information from the Official Royal Wedding website and The Huffington Post, so you can read and catch up as I did.

Burton was long-rumored to be the dressmaker, with buzz starting in March that she'd been tapped for the job. The Sunday Times of London first claimed Burton was The Chosen One and the rest of the British newspapers and, of course, Twitter really went to town.

But, Burton squelched the speculation, telling Vogue UK, "I am not doing it," and McQueen CEO Jonathan Akeroyd, who was said to have leaked the news to a colleague, which then ended up in the Times, denied the reports, remarking, "No, not at all. I am the CEO. I would know if we were doing it."

The turning point was Thursday night when a photograph of a woman appearing to be Burton was spotted entering The Goring Hotel, where Kate Middleton spent the night.

The dress epitomizes timeless British craftsmanship by drawing together talented and skilled workmanship from across the United Kingdom. The dress design pays tribute to the Arts and Crafts tradition, which advocated truth to materials and traditional craftsmanship using simple forms and often Romantic styles of decoration. Ms Burton's design draws on this heritage, additionally giving the cut and the intricate embellishment a distinctive, contemporary and feminine character.

The lace appliqué for the bodice and skirt was hand-made by the Royal School of Needlework, based at Hampton Court Palace. The lace design was hand-engineered (appliquéd) using the Carrickmacross lace-making technique, which originated in Ireland in the 1820s. Individual flowers have been hand-cut from lace and hand-engineered onto ivory silk tulle to create a unique and organic design, which incorporates the rose, thistle, daffodil and shamrock.

Hand-cut English lace and French Chantilly lace has been used throughout the bodice and skirt, and has been used for the underskirt trim. With laces coming from different sources, much care was taken to ensure that each flower was the same color. The whole process was overseen and put together by hand by Ms Burton and her team.

The dress is made with ivory and white satin gazar. The skirt echoes an opening flower, with white satin gazar arches and pleats. The train measures two meters 70 centimeters. The ivory satin bodice, which is narrowed at the waist and padded at the hips, draws on the Victorian tradition of corsetry and is a hallmark of Alexander McQueen's designs. The back is finished with 58 gazar and organza covered buttons fastened by Rouleau loops. The underskirt is made of silk tulle trimmed with Cluny lace.

French Chantilly lace was combined with English Cluny lace to be hand-worked in the Irish Carrickmacross needlework tradition.

All other fabrics used in the creation of the dress were sourced from and supplied by British companies. The choice of fabrics followed extensive research by Sarah Burton and her team.

The Royal School of Needlework

The Royal School of Needlework (RSN), based at Hampton Court Palace, assisted the Alexander McQueen team in accurately cutting out the delicate motifs from the lace fabrics and positioning the lace motifs with precision into the new design. The lace motifs were pinned, 'framed up' and applied with stab stitching every two to three millimeters around each lace motif. The workers washed their hands every thirty minutes to keep the lace and threads pristine, and the needles were renewed every three hours, to keep them sharp and clean.

The RSN's work was used primarily for the train and skirt of the Bride's dress, the bodice and sleeves, the Bride's shoes and the Bride's veil.

The veil is made of layers of soft, ivory silk tulle with a trim of hand-embroidered flowers, which was embroidered by the Royal School of Needlework. The veil is held in place by a Cartier 'halo' tiara, lent to Miss Middleton by The Queen. The 'halo' tiara was made by Cartier in 1936 and was purchased by The Duke of York (later King George VI) for his Duchess (later Queen Elizabeth The Queen Mother) three weeks before he succeeded his brother as King. The tiara was presented to Princess Elizabeth (now The Queen) by her mother on the occasion of her 18th birthday.

The Bride's earrings, by Robinson Pelham, are diamond-set stylized oak leaves with a pear shaped diamond set drop and a pavé set diamond acorn suspended in the centre. Inspiration for the design comes from the Middleton family's new coat of arms, which includes acorns and oak leaves. The earrings were made to echo the tiara. The earrings were a personal gift to the Bride from her parents for her Wedding Day.

A tourmaline and diamond pendant and matching earrings have been designed and made for Mrs. Carole Middleton. Two gold stick pins, one with a single gold acorn at the head and the other with an oak leaf, are also worn respectively by the Father of the Bride, Mr. Michael Middleton, and the Bride's brother, Mr. James Middleton.

The wedding shoes have made hand-made by the team at Alexander McQueen and are made of ivory duchesse satin with lace hand-embroidered by the Royal School of Needlework.

Burton issued a statement to the press talking about the dress (via Harper's Bazaar):

“It has been the experience of a lifetime to work with Catherine Middleton to create her wedding dress, and I have enjoyed every moment of it. It was such an incredible honor to be asked, and I am so proud of what we and the Alexander McQueen team have created. I am delighted that the dress represents the best of British craftsmanship. Alexander McQueen’s designs are all about bringing contrasts together to create startling and beautiful clothes and I hope that by marrying traditional fabrics and lacework, with a modern structure and design we have created a beautiful dress for Catherine on her wedding day.

“The last few months have been very exciting and an incredible experience for my team and I as we have worked closely with Catherine to create this dress under conditions of the strictest secrecy. Understandably, Catherine has been very keen to keep the details of her dress a secret, which is every bride’s prerogative, and we gave an undertaking to keep our role confidential until the day of the wedding.

“Catherine looked absolutely stunning today, and the team at Alexander McQueen are very proud of what we have created. The dress was just one component of a spectacular day, and I do not think it is appropriate to comment any further beyond saying that I personally am very grateful and honored to have been given the opportunity to work on this project, and I wish TRH The Duke and Duchess of Cambridge every good wish for the future.”

Many Blessings to the Happy Couple (William and Kate) and the Royals. Harry your turn!

Thanks to my friends and followers

Posted by Viktor Franovik at 3:16 PM No comments: